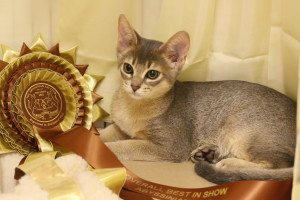 Trudy (UK & Olympic Bronze, Imperial Grand Champion Abydreames Specsappeal) is a very special young lady, she was our pick to keep from Cwen’s second litter with Shadow – and seems to be making quite an impression in the showing scene. we took her along to the Abyssinian Cat Club show on June 13th 2015 at just over 4 months where she bowled everyone over and came away Best in Show! Her next trip out was the Humberside and Lincoln in July, where she was Best in Show Foreign exhibit, and in August – she did it again… Best in Show at the Teesside show!

Trudy enjoyed a truly fabulous 2015 / 2016 show season, she was GCCF kitten of the year as well as flying the flag for the whole Foreign Section. She proudly represented her family in the RACCS points competition and by a narrow margin won RACCS Cat of the Year, 2015. She also won Best Abyssinian, Top Adolescent, Top Kitten and Top Blue Abyssinian. She took most time off to have a family in 2016 and on her return was awarded her first Grand Imperial Certificate at the Abyssinian Cat Association show. She won her qualifying certificate + an extra one at the joint Preston & Blackpool with RACCS show on 25th March 2017. 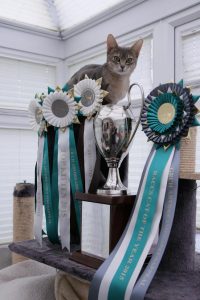