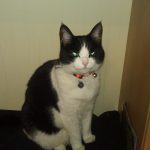 Molly is the oldest of our cats, she will be 18 on her next birthday. she is quite spritely for her age and likes a fuss and to play – as long as she is the only one involved!  she quite likes Magic, but not the Abyssinians – they move far too quick for her likings! she isn’t nasty to them, just a bit vocal when they are passing swiftly, or not minding where she is when they are being roustabouts (which is frequently). 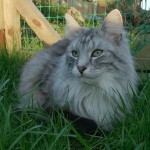 Magic is a very handsome silver tabby and white Norwegian Forest Cat. His story is different from the other cats as he was not ‘planned’. Magic was offered to us after being returned to his breeder at about 7 months. He is quite shy with strangers and most of our visitors never see him because he hides away as soon as he hears a strange voice. We love him and he loves us back and that is all that matters. Magic is adored by and loves his feline ‘sisters’ – even Molly enjoys a nice snuggle with Magic.